Barley: Barley is a hearty grain that compliments winter meals. Add to soups, and stews, or combine with sautéed onions and celery. Contains gluten.

Corn: Use cornmeal flour to bake delicious muffins, and breads. Corn flour is also used in making pasta.  Contains a type of gluten different from that found in wheat.

Farro: An ancient Italian grain that may have sustained the Roman Legions.

Farro is used in soups, salads, and desserts.  Looks and tastes somewhat like brown rice, with a nutty taste.  Farro is also known as Emmer.  Contains gluten.

Millet: A tiny grain, that looks like a seed.  Use it like rice as a side dish, or in a casserole. Gluten-free.

Oats: A sweet-flavored grain commonly used in preparing warm cereal, and cookies.  Oats contain avenin, a protein that may trigger a reaction in celiacs. 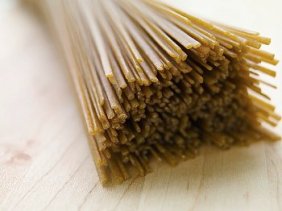 Rye: Rye is a member of the wheat family, and is used in bread making, and Scandinavian crispbreads, and crackers.  Contains gluten.

Triticale: This grain is a hybrid of rye and wheat. Triticale flour is used to bake muffins, breads, cakes, and crispbreads. Contains gluten.

The seeds on this list are used the same way as grains.  Common uses are breakfast cereals, side dishes, and casseroles.  Seeds are available as flour for baking.  If you’re wheat intolerant,  try using seeds.  They’re lighter than wheat, and have their own unique taste.

Buckwheat: Buy Toasted Buckwheat, or Raw.  Use in soups, or as a side dish.    Whole Buckwheat flour makes great pancakes.  If you don’t mind the dark brown color, buckwheat can be used to make cookies, and sweet breads. Gluten-free.

Quinoa: A small seed, that comes in white, black or red. Add fruit and nuts to Quinoa to make a tasty breakfast porridge  Trader Joe’s sells their own brand of penne and fusilli pasta made from Quinoa and Rice.   Gluten-free.

Teff: Teff is an ancient seed, cultivated for thousands of years in Abyssinia.  Teff seeds are about the same size as a poppy-seed.  Teff comes in white, red and dark brown.  Teff flour is used to bake breads, and pie crust.   The seeds can be steamed, boiled, and baked.  Gluten-free.

Irene Pastore is a native New Yorker, health and fitness blogger, and personal trainer. Irene owns this website, and writes all the blog posts. For her complete bio, visit the About Page.